YOU ARE WHAT YOU EAT… AND SLEEP.
Besides food, our mattress and bedding are probably the most intimate products we use everyday. Not only are we up-close and personal with our sleep products, keep in mind we spend a 1/3 of our lives sleeping.

Collectively that’s a solid four months every year we spend in bed. Because we rarely give it thought, most of us are more concerned about the food we put in our mouth rather than the pillow we have up against our nose for eight hours every night.

MEMORY FOAM
Memory foam is a petroleum-based polyurethane with additional unregulated “proprietary” chemicals which increase the viscosity and density of the foam. The proprietary formula is what “sucks you in” as you lay helplessly trapped inside a squishy sink-hole of chemicals. 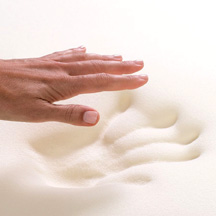 A class action suit has been filed in California courts alleging that Tempurpedic’s memory foam mattresses contain harmful VOCs. They believe the company has minimized the problem when advertising their products by stating that the odors will dissipate and that products are VOC-free, when formaldehyde and other odors may continue to be released for months. To date, there’s been no resolution; the suit is still active.

THE CLAIM ON THE ATTORNEY’S WEBSITE states that formaldehyde, a strong VOC and known carcinogen, has been identified in laboratory testing of Tempurpedic products.

Manufacturers are not legally required to disclose the chemicals in mattresses.

Memory foam can help reduce pressure points which is why it’s a popular choice for mattresses and pillows, however its low resiliency doesn’t offer total full-body support for your entire body and heavier parts of your body will sink in more. The deeper you sink into the mattress, the more likely you’ll “sleep hot.” It should also be noted that the temperature of your bedroom can lead to the mattress becoming “too soft” or “too hard.” Most of these attributes are contributed directly to the chemical composition used to make memory foam.

DON’T BE FOOLED BY SOY-FOAM
Consumer awareness is growing and chemical manufacturers are developing marketing gimmicks which fool consumers into believing certain foams are safer, healthier and eco-friendly.

Take for example soy-based or bio-based foam. What they don’t tell you is that the foam contains very little soy. In fact, it is more accurate to call it polyurethane based foam with just a little soy added for marketing purposes. In fact, to date, the highest percentage of soy used in foam is only 20%. Since polyurethane foam is made by combining two main ingredients — a polyol and an isocyanate — in approximate equal parts, “20% soy based” translates to a mere 10% of the foam’s total volume and 90% as polyurethane.

POLYURETHANE FOAMS AND FIRE RETARDANTS
Large amounts of unregulated chemicals can be found in almost all synthetic foams (including soy-foam). The basic ingredients include polyols, isocyanates, blowing agents, and other additives including flame retardants. Although PBDEs have finally been phased out due to documented health hazards, new alternative chemicals are now being used in their place during the manufacture of flexible polyurethane foam. In addition, many fabrics are coated with both stain-resistant chemicals and flame retardant chemicals.

According to a recent EPA report released in August of 2015, most of these newer chemicals still have “limited data” with notes such as: “There is uncertainty due to lack of data for this substance. XYZ is estimated to have uncertain potential for carcinogenicity based on analogy to a closely related confidential analog and professional judgment; carcinogenic effects cannot be ruled out.”

Most exposure to flame retardants occurs after the chemicals migrate out of a product’s foam and settle into household dust, which then enter our bodies. The chemicals are constantly dispersing into the air, then settling. Exposure comes primarily from ingesting contaminated dust.

Mattresses made with foams that have the CertiPUR® label are marketed as a safer foam with a certification from “The Alliance for Flexible Polyurethane Foam”. The Alliance is made up of foam manufacturers who certify their own foam to their own standards.

One such standard is the foam is made without PBDEs, TDCPP or TCEP Tris flame retardants. PBDEs  have been phased out and Chlorinated Tris is banned in many states. The chemical industry is replacing the banned FRs with newer, untested chemicals.

According to Heather Stapleton, Ph.D. in environmental chemistry and authority figure on the toxicity of flame retardants, “The (Certipur) label… is simply an advertisement for the Certipur program. This is a program developed by US polyurethane foam manufacturers to demonstrate environmental stewardship. It means that the foam used in that product has been tested for several known toxins including VOCs, metals and a few flame retardants. But the product can certainly still contain a flame retardant and have the Certipur label. There are many (FR chemicals) in use on the market today that are not tested in the Certipur program and for which we have concerns about health effects.”

“We don’t know as much about the health effects of replacement flame retardants,” according to Stapleton, “but a few studies have shown that these new chemicals may also disrupt hormone function.”

CozyPure® doesn’t use polyurethane foam, soy-foam, memory foam, chemical flame retardants or treated fabrics. Our natural rubber latex is wrapped inside organic cotton quilted to wool which passes the Open Flame Federal Regulation. Wool self-extinguishes and doesn’t burn black toxic smoke when ignited. Why toss and turn all night worrying about unknown chemicals and flame retardants when you can sleep soundly on a mattress made exclusively from organic and natural ingredients?

SYNTHETIC LATEX, BLENDED LATEX, NATURAL LATEX
Synthetic latex (SBR) is derived mainly from the industrial chemicals styrene and butadiene. These copolymers are emulsified, and other chemical agents are added as stabilizers for polymerization and vulcanization.

Natural latex rubber (NR) is derived using 100% of the milk from the hevea brasiliensis rubber tree. Additional ingredients (less than 5% combined) include soda ash, zinc and soap which are whipped together with the rubber milk. The frothy mixture is then poured into a pan and baked — just like a cake!

Most latex offered in mattresses is either 100% synthetic or a blend of 80% synthetic and 20% natural. Manufacturers, like CozyPure®, who specialize in organic and natural materials offer only 100% natural latex rubber mattresses, with no synthetics, fillers or blends.

Trying to determine what kind of latex is in a mattress can be very difficult for consumers because of confusing wording or phrasing. For instance terms like “pure latex” many times refers to 100% synthetic man-made chemical latex because it is pure (solid) latex. Terms such as “made from natural latex” often refers to blended versions that have only a portion of natural, hence they can say “made from” even if it’s only made from 20% natural. Confusing right? We agree. And trying to find the correct answers, can be challenging.

Unfortunately most salespeople, especially in larger retail stores, often don’t know the difference so there’s a huge probability you’ll receive inaccurate information (we know because we’ve visited most of them). Be aware also, that many retailers will label a mattress as being a latex mattress even if it has as little as 1” of latex in its construction.

If you’re not sure about the latex in a certain mattress, ask to see the certifications or check the law label. To find mattresses made only from solid 100% natural latex rubber, the best bet is a smaller manufacturer who specializes in using only natural materials, like CozyPure®.

One reply on “UNDERCOVER: KILLING US SOFTLY. A look at the ingredients inside mattress components”

[…] sure to read our article “UNDERCOVER: KILLING US SOFTLY” an investigative report on mattress components and what’s really inside your […]